Whether eaten or consumed as tea, the uses of dandelion span from wild food to trusted herbal remedy to gently support the body’s natural detoxification process. 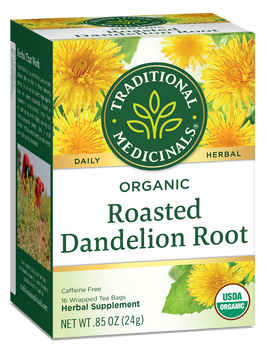 Some think of dandelion as a common weed, but our herbalists know that its bitter taste stimulates digestion and supports your body’s natural detoxification process. An underestimated “weed” with herbal prowess.

Dandelion is a small perennial from the Asteraceae family that grows well in soils of all types—a quality that makes this plant so resilient, adaptable and widespread. Although a native of Europe and Western Asia, dandelion is now naturalized in many countries around the world. It attracts pollinators and earthworms and loosens the soil with its strong, deep roots.

Key identifiers for finding a “true” dandelion, as there are many Asteraceae look-alikes, is the singular, hollow stem attached to each bright yellow flower. When picked, the stem produces a drippy white substance that is actually a form of latex. Many yellow dandelion look-alikes will have multiple flowers branching off the same stem.

Another trait specific to dandelion is its jagged, hairless leaves, which earned it the name, dent de lion, meaning “lion’s tooth” in French and Spanish. Its round yellow flower has inspired others to call it “swine snout.” But it is dandelion’s botanical name of Taraxacum officinale, which speaks more favorably to the herb’s true purpose, in some translations as “healing herb.”

While the first puffy blooms of dandelion likely dotted landscapes in obscurity, the first known mention of dandelion as a medicinal herb is in Arabic texts dating to the 10th century. By the 13th century, it was mentioned in a Central European herbal text alongside 180 other medicinal plants and was primarily credited with a beneficial effect for the eyes. While common modern uses tend towards its effects on urinary, detoxification and hepatic functions of the body, it’s clear early practitioners and scholars were beginning to see dandelion as more than a common wildflower.*

More than an herbal medicine, over time humans quickly discovered the culinary appeal of dandelion from flower to root. Various cultures brewed the roots to make a slightly sweet and bitter tea or broth, fermented them into a hearty “root beer,” and dried, roasted and ground them into a rich powder for a robust “coffee-like” beverage. Others learned to harvest the young spring leaves to add to soups, juices, and salads. The yellow “petals” can be plucked from the head of the dandelion and sprinkled over salads, brewed into golden dandelion wine, transformed into a “honeyed syrup,” or kept intact as a blossom to batter and fry into crispy fritters.

Our Organic Roasted Dandelion Root tea is formulated to stimulate the liver and support healthy digestion. Specifically, the bitter flavor of dandelion roots stimulates the taste buds, triggering the secretion of digestive juices along the digestive tract, thus supporting the body’s innate digestive and detoxification processes. Dandelion is undeniably the unsung hero of the plant world. Often overlooked or dismissed as a weed, the sunny dandelion manages to rise above stereotypes to be one of the... From an herbalist’s standpoint, each season is tied to an element or quality within nature. Fall signifies both the end and beginning of a cycle. The end of summer, a... We have all heard the “new year, new you” mantra, advocating that we empty our closets, create resolutions and detox our lives. Every checkout line magazine and wellness center across... Did you know herbs are some of the most effective digestive aids? Teas made with ginger, peppermint, and chamomile are incredibly popular, and for good reason—they work. But they aren’t...