In an era of increased tension and stress, skullcap’s nerve-calming powers couldn’t be timelier.*

Let skullcap help melt away tension in the body and mind.*

What are the Benefits of Skullcap?

When taken regularly, skullcap can help to relax the body and the mind, restoring a sense of balance. In herbalism, skullcap is known as a nervine, an herb that calms nervous tension and relieves occasional stress. It’s also a trophorestorative, an herb that over time supports and restores the function of a system of the body—in this case, the nervous system.*

Our herbalists suggest sipping on skullcap tea before bed, or in anticipation of your menstrual cycle; it’s an incredible plant ally to help the body soften and release. Consider it a go-to when muscles are stiff and you’re holding onto the day a little too tightly.*

Folklore & Historical Use of Skullcap

Scutellaria lateriflora appears in the first American Materia Medica, published in 1785. While skullcap grew wild throughout Europe prior to the colonization of the Americas, the North American species was the first to make a significant mark on herbal medicine. European settlers and folk herbalists learned how to use skullcap from Cherokees and Native American tribes, who had traditionally consumed it as a tea to soothe the nerves, to promote women’s health and was sometimes used in ceremony. Herbal physicians then brought it back to Great Britain in the 19th century, introducing more people to its relaxing benefits.

The leaves, stems, and flowers are now widely used as herbal medicine domestically and abroad.* Today, herbalists use it for many reasons, but primarily to relieve tension, nervousness, and irritability associated with occasional stress.*

Skullcap hails from the mint family, Lamiaceae, which is easy to identify by the characteristic square stems and the jagged edges of its leaves. This perennial thrives in moist, shady riparian habitats, from forests and thickets to meadows and marshes and is a native plant of North America. Scutellaria lateriflora, the native species we use, grows up to three feet tall and is adorned with dainty blue flowers formed by two tongue-like petals.

Together, the petals were said to resemble the helmets of medieval European soldiers, hence its common name: skullcap. Farmers and collectors harvest the plants while they are flowering—the peak of their herbal power—then cut and dry the leaves and stems to use as herbal medicine. 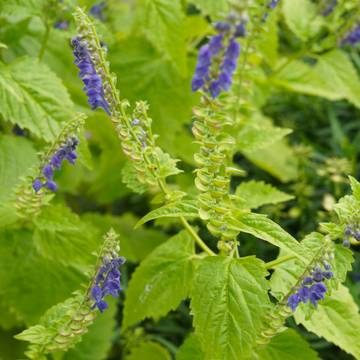 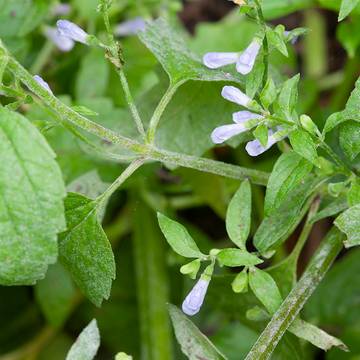 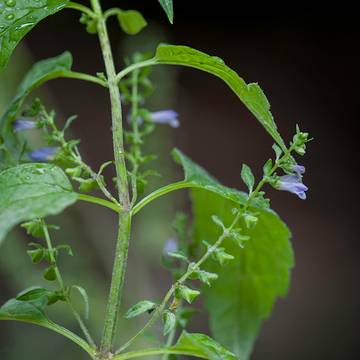 When To Use Skullcap

Whenever you’d like to release tension in the mind and body.

Before bed to help you melt into your pillow.

Drink in the early evening to let go of the day’s stresses.