European and Native American women have been reaching for raspberry leaves for centuries to relieve normal menstrual cramps and prepare the womb for childbirth during pregnancy. 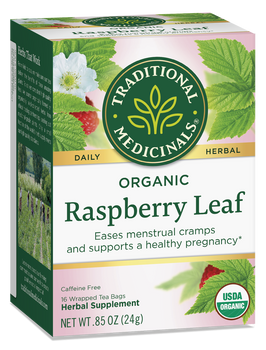 Most commonly known for its juicy red berries, the leaves of the raspberry bush have traditionally been prepared as an herbal infusion or tincture to support everyday conditions of the female reproductive system. When enjoyed as a tea, raspberry leaf imparts an earthy flavor similar to black tea due to its tannin-rich phytochemical makeup. This high tannin content is what contributes to raspberry leaf’s benefit as an herbal astringent, which helps to tone and tighten tissue. This action is what makes raspberry leaf the perfect herb to ease normal menstrual and gastrointestinal cramping and toning the uterine tissues for labor.* Traditional herbal practitioners have even used it for the mouth or throat and for relief of loose stool for this very reason. In addition to its impressive astringent properties, raspberry leaf is also considered nutritive and antispasmodic.* Categorized in herbal medicine as a tonic herb, raspberry leaf tea can be enjoyed as an everyday supplement.

Whether you’re enjoying the delectable red berries or the full-bodied flavor of the leaves, incorporating this powerful herb into your routine can be wonderfully supportive.

Although there are many species of raspberry plants, Rubus idaeus is the most recognized for its medicinal properties within herbalism. It’s said the Greek Olympian Gods could be found collecting the ripe berries around Mount Ida, hence the name Rubus idaeus which means “bramble of Ida” in Latin.

European and Native American women have used these leaves for thousands of years to prepare the womb for childbirth, and some farmers even use it for their lady goats who are expecting. And raspberry leaves aren’t just for women, its been traditionally used as a spasmolytic in cases of diarrhea.

Raspberry leaf is traditionally used throughout pregnancy to help tone the uterus in preparation for childbirth. *Prior to the use of our Organic Raspberry Leaf tea or other herbs during pregnancy, we encourage individuals to consult with their healthcare provider. This wild looking plant with its juicy red berries may seem like just a simple sweet treat, but it’s much more than that. It was once said that the Greek... Did you know that wild plants are important ingredients in your food, cosmetics, medicine, and especially close to our hearts – herbal tea? As the demand for natural products continues... Every woman is intimately tied to nature. Throughout a woman’s life, several natural transitions are influenced by hormones, which are often in sync with nature’s cycles. The menstrual cycle follows... Mamas, we see you. You’re providing every minute of the day, and continually researching the best for your growing family. You’re navigating an uncertain world while offering balance to those...