Utilized by Native American peoples as an all-purpose remedy for generations, echinacea now finds itself in everything from tea and tincture, to supplement tablets, for its contribution to immune support.* 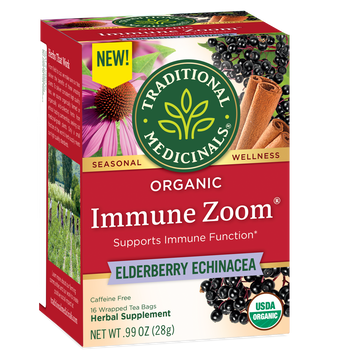 Indigenous to North America, Echinacea is one of the most well-studied plants in herbalism. Combined with licorice root and the celebrated elderflower and elderberry, this tea will give your immune system a boost when you need it most. And with sweet and tart elderberry notes mixed with warming cinnamon, this tea is as tasty as it is comforting. Cozy up with this tea and be ready for whatever comes your way! This blend fires up the immune system
Quick Buy
Popular Echinacea, a staple for immune support.

Echinacea’s beneficial compounds are found in all parts of the plant, but are most concentrated in the roots. The tingly alkylamide molecules in echinacea which fire up immunity are best preserved in ethanolic extracts. The polysaccharides and glycoproteins fortify the immune system over time and are best extracted with hot water, making a hot tea one of the best ways to enjoy the benefits of this herb.* Of the two most commonly used species of echinacea, E. angustifolia and E. purpurea, E. angustifolia is considered to have more immune-boosting phytochemistry.*

The entire Echinacea genus is indigenous to North America and originally dwelled in prairie lands, where Native American tribes have used it as an all-purpose herbal remedy for generations.

In the mid-1800s the American Eclectic physicians began to use echinacea and its use spread to Europe, where it gained even more popularity. By the beginning of the 20th century, it was one of the most frequently plants used herbal medicines in the United States, which eventually led to the widespread overharvesting of this wild perennial. Thanks to the conservation and public education efforts of the United Plant Savers, cultivated echinacea is now available for widespread use in many regions of the world.

Echinacea is stimulating and supportive, providing a healthy boost to the immune system.

We primarily use organic Echinacea purpurea. The colorful echinacea plant has become a household name, thanks to its amazing immune-boosting properties.* More commonly known as “coneflower,” this plant is native to North America but has also...

A Peek Inside: Echinacea Plus

A Peek Inside: Echinacea Plus

With the tingling sensation Echinacea gives to the tip of your tongue and its incredible immune boosting properties, it is hard to deny this plant’s power.* The plants of the... Best Teas for the Cold Season

Best Teas for the Cold Season

Feeling under the weather as the temperature is dropping? Herbs can help. We turn to plant allies like echinacea, elderberry, yarrow, and eucalyptus for extra support when we need it...