As one of the most commonly known herbs, peppermint is like a breath of fresh air with its refreshing aroma and soothing health benefit in aiding digestion. 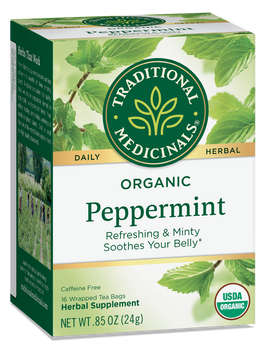 We source this peppermint primarily from our partner-growers in the Pacific Northwest. Their pristine conditions and organic practices help us achieve a crop that’s rich in essential oils, lending our tea its distinctive minty taste and its highly soothing digestive benefits. The perfect post-meal tea! Pep up digestive fire with peppermint.

Peppermint (Mentha x piperita) is a cooling and uplifting herb, with an unmistakably invigorating aroma that can be credited to its high essential oil content. In fact, one of peppermint’s active compounds is menthol, the source of its telltale frosty tingle. Menthol is classified by herbalists as a carminative, a volatile compound that helps to slow smooth muscle contractions. As we ingest menthol, the muscles of the digestive tract relax, quelling nausea, relieving bloating and easing occasional indigestion.* With its pleasant flavor and knack for supporting the digestive tract, it is an excellent choice for everyday enjoyment.* It's no wonder peppermint has found its way into after-meal treats, in the form of peppermint candy and digestif liqueurs worldwide.

Dried mint leaves have been found in ancient Egyptian pyramids, and mint was so greatly valued in Biblical times that it is referenced in the New Testament as a payment for taxes. In Greek mythology, the water nymph Minthe was turned into a mint plant after a tryst with the god Pluto (an explanation for many mint varietals’ preference for moist soils).

In the first century AD, the Roman naturalist Pliny noted that the Greeks and Romans used mint to flavor sauces and wine, and it is referenced in a west Nordic pharmacopoeia fragment of the 13th century. But it wasn’t until the 1700s that the peppermint we know today began to be commercially cultivated as a medicinal plant. It quickly spread from England to Western Europe and around the world, noted for its fresh flavor and its ability to calm cranky digestive systems.

Today, it’s a common sight throughout grocery store shelves from the produce section to the dental hygiene aisle. As herbalists, we love it as an invigorating herbal tea or in an herbal alcohol-based tincture to support bellies.

Our Organic Peppermint tea soothes the belly and relieves occasional digestive discomfort. Menthol, one of peppermint’s main active compounds, encourages the muscles of the digestive tract to relax and helps to slow muscle contractions, contributing to overall healthy digestion.

Peppermint tea can be consumed daily.  It is a caffeine-free herbal digestive that can be enjoyed any time of day, and is particularly helpful before or after meals. That said, we encourage individuals to consult with their healthcare practitioner for personalized consumption recommendations depending on their unique health history. Although it’s well known and quite commonly grown, we think peppermint is a bit of a rare bird – one whose song shines in a solo, but also harmonizes beautifully... Consuming healthy foods and beverages plays a key role in digestion and in maintaining daily wellness. Sharing this philosophy, our herbalists created our organic Peppermint Delight® Probiotic tea to provide... A Peek Inside: Our Peppermint Tea

A Peek Inside: Our Peppermint Tea

Like a breath of fresh air, there’s no other herb quite as uplifting as peppermint. Found in everything from breath mints and toothpaste to desserts and herbal tea, it’s the... Lately the thermometer seems to be creeping up and up. Iced tea is being gulped down like water and summer tunes are in constant rotation. With things heating up, we...