Believed to be a harbinger of luck, red clover’s benefits extend beyond lore, bringing tangible good fortune as a restorative spring tonic and supporter of skin health.*

The “lucky” herb helping you glow from the inside out.

What are the Benefits of Red Clover?

While red clover has lured many to their knees in search of an elusive four-leaved charm, its rosy flowering top is what has brought good fortune to the health and wellness of many over centuries.

Puffy and pink during full bloom in spring, red clover blossoms are traditionally used to support skin health.* As early herbal practitioners discovered, its benefits are best experienced when harvested and dried then consumed as a tea or herbal tincture as part of a regular skincare routine.

Part of a classification of herbs known as alteratives, red clover traditionally supports the detoxification functions of the liver and lymphatic systems, potentially contributing to its ability to get you glowing from the inside out.*

Beyond skincare, Native American healers have long revered it for its ability to support women’s health. Modern-day herbalists appreciate red clover because of its isoflavone content.

Historically, Chinese and Russian herbal healers have even used it to support respiratory health, while Europeans incorporated it into their formularies for digestive health.*

In traditional Chinese medicine, red clover is believed to help clean the blood, clear heat and remove toxins. Internally, red clover is used to support women during the transition of menopause; as well as for other skin concerns. In European herbal medicine, it was valued for both for digestive and respiratory issues. While red clover has found itself in traditional herbal formulas for a variety of uses, our red clover tea is a favorite of ours to support healthy skin.*

Folklore & Historical Use of Red Clover

Although the four-leafed variety gets all the good-luck glory, most red clover plants have three leaves, hence its Latin name, Trifolium (meaning three leaves) pratense (meaning grown in meadows). The triple-leafed herb invoked the sacred for a variety of ancient cultures; Greeks and Romans associated it with the triad goddesses, while the clover reminded Celtic priests of their three-lobed symbol of the sun. Druids believed the blossoms could ward off nasty spells and evil spirits.

Early Christians connected the three-leafed plant to the Christian trinity, and the less common four-leafed clover was associated with the four points of the cross. And of course, the Irish embraced the clover’s auspicious symbolism with more gusto than anyone else. An Irish rhyme dating to medieval times says a four-leafed clover has “one leaf for fame, one leaf for wealth, one for a faithful lover, one leaf for glorious health.”

Natively from Europe, North Africa, and central Asia, red clover was incorporated into the healing traditions of Russia, China and North America as its migration extended into new lands.

Crowned with a soft, brush-like, deeply pink blossom, the red clover plant is as pretty as it is persistent. Though it likes sunny, well-drained soils best, it can grow in many kinds of soil conditions and climates, and it is well known to be one of the best rotation crops for fixing nitrogen into farmland. Though you wouldn’t know to look at it, the dainty-yet-hardy perennial is actually a member of the legume family, related to beans and peas. 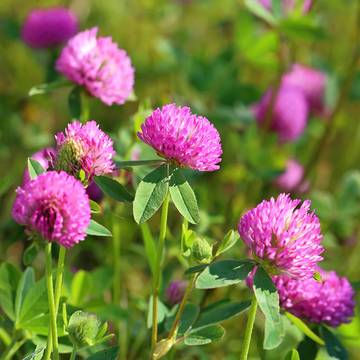 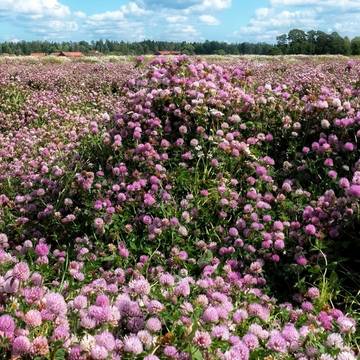 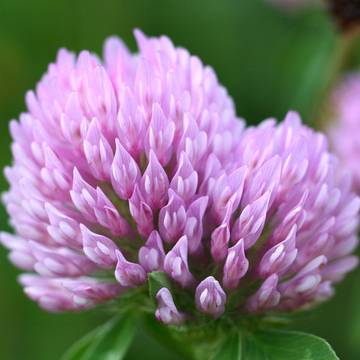 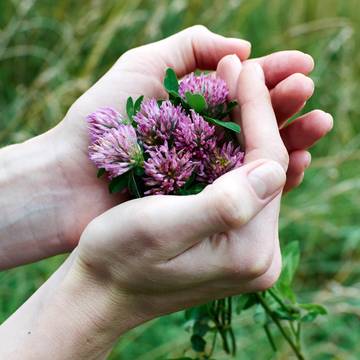 When To Use Red Clover

During the day to get glowing

Wake up with a cup for gentle activation. Consult your healthcare practitioner prior to use if you are currently taking medications for hormone replacement therapy, or if you are pregnant or breastfeeding.